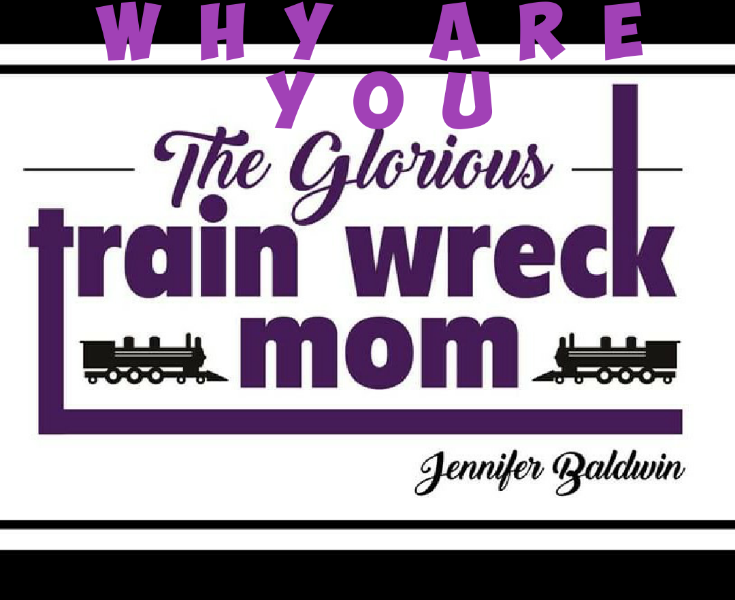 You may have found yourself asking, “Why did she pick Glorious Train Wreck Mom?”

Well, it’s simple really. My life is a train wreck. Let me define.

A train is just trying its best to get from one place to another. Safely. On time. But sometimes, things don’t go according to plan. There are delays, missed trains, waiting, and crashes.

The crashes are when it all just stops. Usually, no one is hurt. Sometimes, there are casualties.

My life is very much a train wreck. But not just any ordinary train wreck. It’s glorious. Think of Gomez Addams with his model trains. Things go well. Well enough to speed up. Keep going. Speeding along. Chugging along. Then BOOM!

On the other side, I saw all these “mom types.” Helicopter. Tiger. Pinterest. Where were the moms who tried but on got it about 85% there? What did you call a mom who lets her kids play on the phone just so she can poop? Who were the moms eating a Hershey bar in the bathroom while the shower runs? Those are my people. That’s my mom tribe. I had to do something. So, I gave it a name.

And there’s no shame in that name. No shame in the game. I’m a train wreck. Loud and proud.

So, I became the Glorious Train Wreck Mom. And I made it mission to help people laugh at the ugly parts of life. Whether it’s your son roaring at his teacher. Or your teenager stealing headphones. Or the monsters in your head getting too loud and strong for you to deal with.

If you’re reading this and it sounds like a train you’d like to ride, then welcome aboard, train wreck.

2 thoughts on “Why A Train Wreck Mom?”