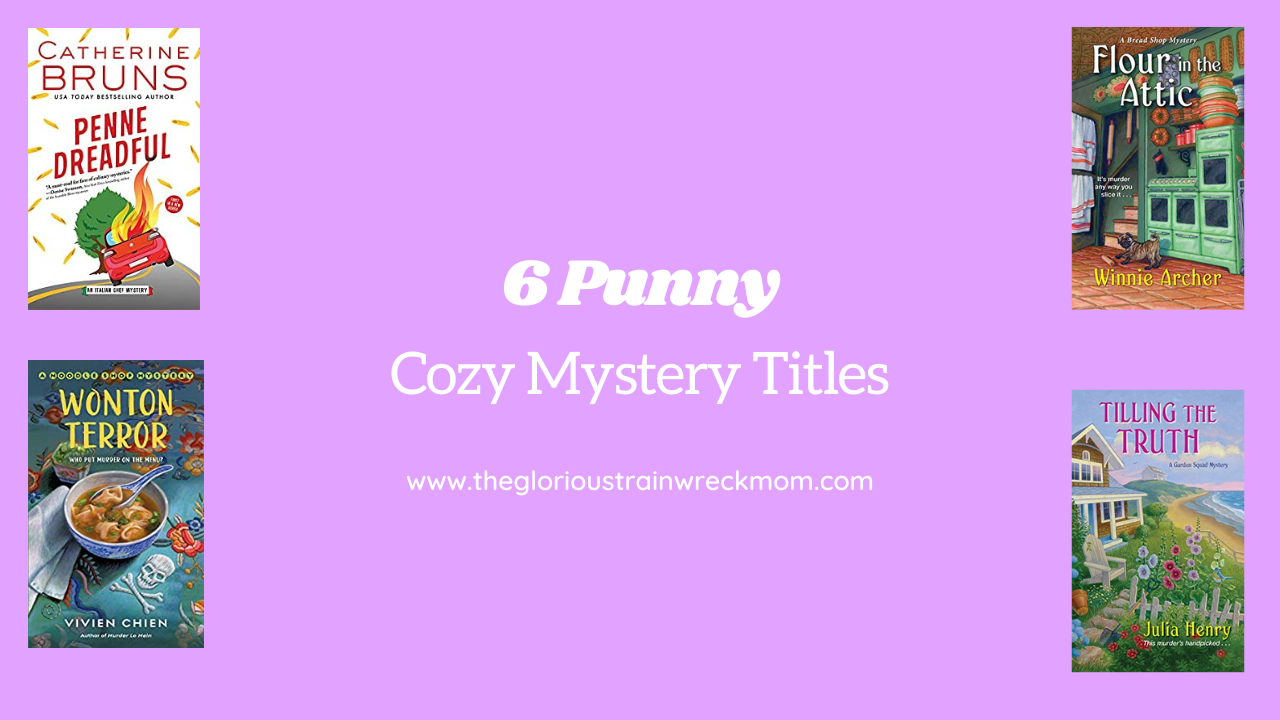 The cozy mystery title is a key aspect of the genre’s endearing atmosphere. Find them in the mystery section of any bookstore or library; they have colorful covers, are shorter, and frequently have clever puns in the titles. But these titles are intended to do more than just make you chuckle whenever you see them in a list or browse a bookcase. The use of catchy phrases in the names suggests that despite the grisly subject matter, the novels will be entertaining.

In a genre filled with excellent works, these six stand out for their uniqueness, humor, and jaw-dropping greatness.

This content contains affiliate links. When you buy through these links, I may earn an affiliate commission.

Chef Tessa Esposito solves a murder mystery in the first book of a series about her life. The sad death of her spouse is initially interpreted as an accident. After her husband’s suspicious death, Tessa poses as a customer at the pizza joint he frequented so she may discover more about his life. Not only do the anchovies stink, but she may soon be in some serious trouble as well.

FLOUR IN THE ATTIC

The title of the fourth installment in the Bread Shop Mysteries series is the craziest, most hilarious example of the cozy mystery subgenre. There doesn’t appear to be a scene when four blond kids are locked up by their evil mom. Instead, Ivy Culpepper, a baker by day and a detective by night, is investigating the case of a body found on the beach.

Noodle shop owner/amateur detective Lana Lee investigates a tragic food truck explosion in the fourth book of the Noodle Shop Mysteries series. As in the other novels, Lana had to juggle her desire to solve the crime with her responsibilities to her family. Lana feels like she’s gone from the frying pan into the fire because of her attractive police officer lover.

This is the second book in the Garden Squad Mystery series, featuring a group of retirees who wind up solving cozy mysteries. Go-getter senior Lilly Jayne and her pals are keeping busy over the summer. When someone is murdered in their idyllic community and a Garden Squad member falls under suspicion, it’s up to these ladies to get to the root of the mystery.

SHOT THROUGH THE HEARTH

In this installment of the Fixer Upper Mysteries series, intrepid contractor/sleuth Shannon Hammer is called upon to solve… another murder investigation involving house renovations. Evidence suggests that her long-time acquaintance is responsible for staging a murder during a seminar on sustainable living. As always, Shannon must solve the murder mystery before her buddy is falsely accused.

Shopkeeper/mystery writer/amateur detective Samantha Washington solves a murder while out on the town in the fifth edition of the Mystery Bookshop series. When Nana Jo and her buddies from Shady Acres Retirement Community go on an outing, someone has to play the role of navigator and make sure they don’t hit any pitfalls.

DACHSHUND THROUGH THE SNOW

Wordplay is practically expected in all Christmas literature. When you put that together with a cozy mystery about a dog, you get this fantastic book. In the newest entry of the Andy Carpenter series, the lawyer (along with his trusty golden retriever, Tara) assists a small boy and his lovable dachshund in solving a case.

If you’re in the mood for a good, light-hearted mystery, then be sure to check out some of these cozy titles. They may have dark and dangerous undertones, but they are nothing if not fun. And isn’t that what we all need every once in a while? A little escape into another world where the most pressing concern is catching the bad guy instead of dealing with our own day-to-day stressors? I know I do. Have you read any of these six amazing cozy mysteries? Let me know in the comments which one was your favorite!