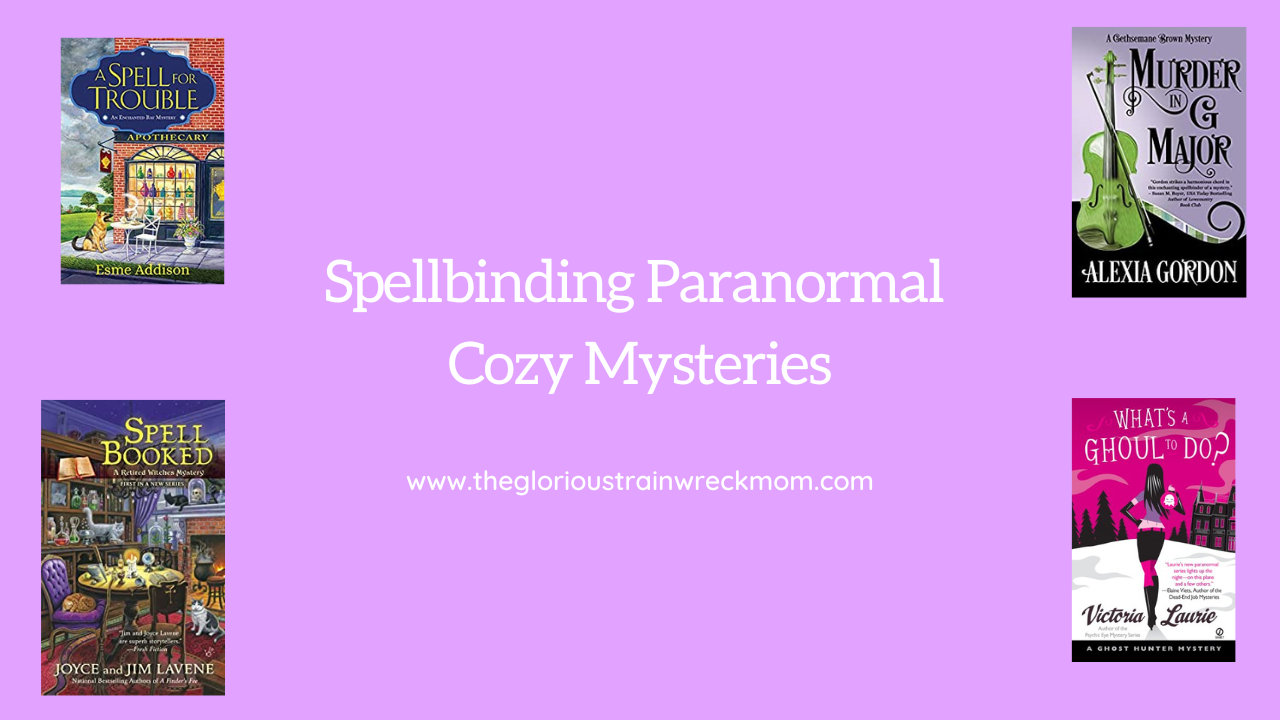 Cozy paranormal mysteries are the best form of getaway from the mundane world. In addition to the usual cozy features like murder and mayhem, these tales also feature a wide variety of otherworldly beings.

Cozy mysteries are great for a reading marathon (24 hour reading challenge, anyone?) because there are generally more than 10 in a series and they don’t break the bank. And if you can’t find the supernatural being you’re seeking for, chances are good that it’s the subject of a cozy mystery!

Here are just a few series to get you started reading paranormal cozy mysteries, of which there are hundreds (really, hundreds) available.

This content contains affiliate links. When you buy through these links, I may earn an affiliate commission.

After her mother passed away, Alex was forbidden by her father to spend time with her aunt and cousins. After putting it off for almost two decades, Alex agrees to join the family company, a herbal pharmacy. Her family has been the subject of vicious gossip for generations in their sleepy little hamlet, where it is said that they practice dark arts to heal. After someone is poisoned and Alex’s aunt is accused of murder, the rumors spread like wildfire. Alex must identify the real murderer before she becomes the next victim. This is a classic among paranormal cozy mysteries and a good starting point for newcomers to the genre.

The first book is titled “A Spell for Trouble.”

As a musician on the brink of financial ruin, Gethsemane Brown must seize any opportunity for steady work that comes her her. In addition to the income, she will also have a place to reside; she will be housesitting a little cottage on the edge of a cliff in Ireland. However, nothing is ever as easy as it seems, and the cottage’s deceased owner still lingers in the house. Gethsemane decides to find his murderer so he can rest in peace. This paranormal cozy mystery series combines two of my favorite things: ghost stories and armchair travel.

Though the North Carolina curio business owned by Molly, Elsie, and Olivia became famous, the sisters were unable to stop the passage of time. The old witches have seen their magic dwindle with age, and now they must relinquish it in order to train three young ones. Unfortunately, reality isn’t as neat and tidy as our ideals. Featuring elderly protagonists, magic, and murder, this cozy mystery series is anything from ordinary.

M.J. and Gilley run a ghost-hunting firm together, and they have a new customer who wants them to investigate the murder of the client’s grandpa. The mansion is haunted by more than one ghost, though, and M.J. and Gilley are caught in the middle of a number of rivalries.

What’s a Ghoul to Do? is the first installment in the series.

Lily has a vintage clothes shop in San Francisco, and she’s hoping to get a regular life, so that’s where the action of this lovely paranormal cozy mystery series takes place. She’s sick and weary of getting into problems because of her magical skills. However, when one of her clients is murdered, Lily is forced to put her psychic abilities to the test in order to uncover the truth.

After accidently capturing a ghost on her home, graphic artist Verity Long begins to see visions of many ghosts. When ghostly disturbances arise, she teams up with Ellis Wydell, the town’s renowned rule-breaker, to solve the cases.

Check this this series first if you’re hesitant to fully immerse yourself in the paranormal cozy mystery genre. The first three books in Kyra Davis’s Sophie Katz Murder Mysteries series had nothing to do with the paranormal, and this is the fourth. Sophie has a serious thing for Victorian architecture. She is set on buying the property regardless of the potential problems that may arise. Her real estate agent also happens to be her ex-boyfriend. Things are as bad as they possibly can be.

Everything about Halloween is year-round in Nocturne Falls. Tourists may believe it’s all in good fun, but the local population of vampires, werewolves, witches, and the like must maintain appearances lest the truth be out. Delaney James, the protagonist of this paranormal mystery series, disguises herself as a mail-order bride to escape her gangster employer in the first novel. What she doesn’t realize is that her new husband is a vampire who has been around for 400 years.

Book One: The Vampire’s Mail-Order Bride

Conclusion paragraph: If you’re in the mood for a little bit of everything – including a healthy dose of the supernatural – cozy mysteries are your best bet. With more than 10 books per series, and prices that won’t break the bank, these tales will keep you entertained for hours on end. Have you read any of my favorite paranormal cozies? Let me know in the comments below!