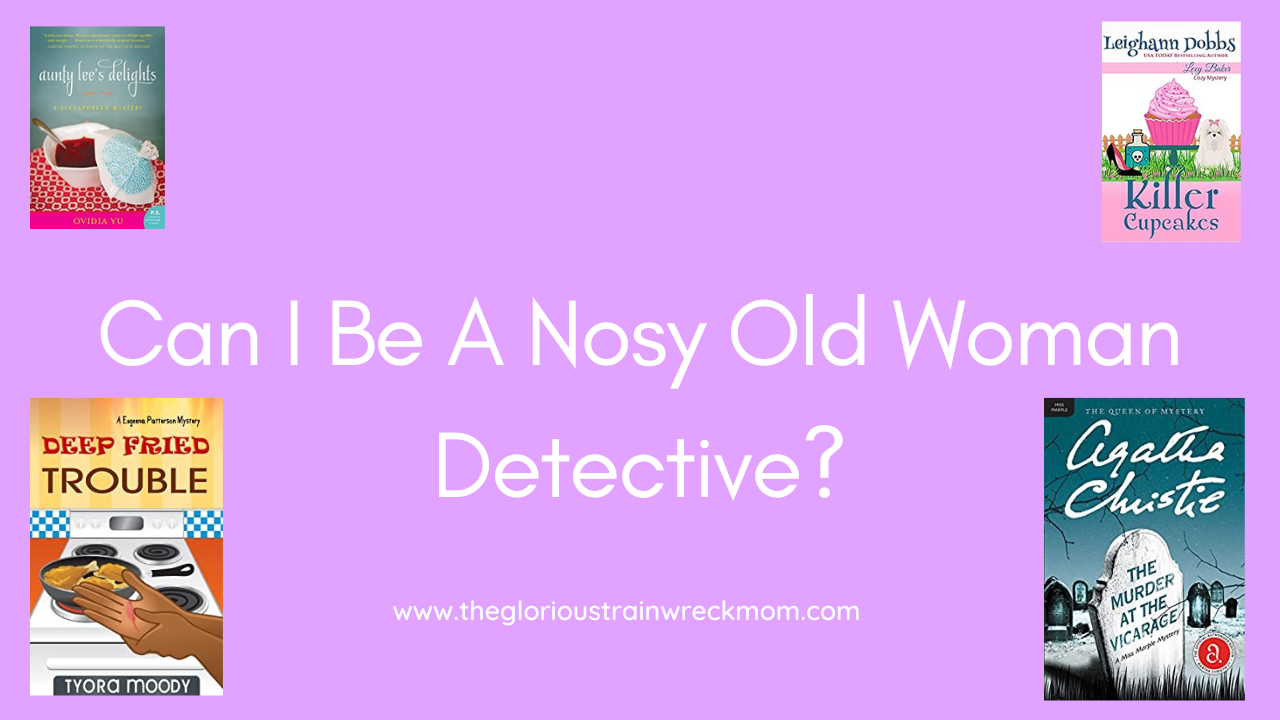 There are affiliate links in this article. I could receive an affiliate commission if you make a purchase using these links.

As you age, a curious phenomenon seems to take place. People begin to treat you as you are unable to perform even the most elementary chores after a short time. To live a life that is basically autonomous and then suddenly find yourself treated like a helpless creature must be more than a bit upsetting. Before they get old, people live long, healthy lives, and guess what? They successfully reached that level, thus I believe they understand how to play the game of life.

This appears to be particularly true for females. In all honesty, while kids are younger, they don’t get much recognition for their contributions. It follows that after people reach their golden years, this doesn’t alter.

Which brings me to the reason I think old woman sleuths are so incredible. They dispel many myths that people have about persons who fit the stereotypes of being both feminine and elderly. People still make similar assumptions in this contemporary society, and sadly there is little indication that this trend will soon change.

Here are a few of my favorite aspects of the elderly woman detective archetype and the reasons I will always be an advocate for it.

Now that I’m an adult, I really believe this. Many things are available that you truly don’t obtain until you’re older and in positions of power.

As a result of this presumption being formed about them by another character, many of these people end up fleeing. Consider Elizabeth from the Thursday Murder Club books and movies. She uses the “feeble old lady” angle whenever she speaks to someone who isn’t a member of her circle or Donna. Elizabeth’s response to Donna calling her this repeatedly throughout the novel is that she is simply caving to expectations and taking advantage of them.

This is notably clear in a scenario where Elizabeth and Joyce visit the police station where they live. Elizabeth poses as a worried elderly woman who prefers to talk to a female cop in order to gain access to Donna.

It’s not as though these cops could have realized how intelligent Elizabeth was. However, it was clear by the way they spoke to her and flew into protective mode that they didn’t think she was as intelligent as they are. So they played straight into her expectations by bringing a female cop to the room when she asked for one in the hopes of getting Donna.

Old does not equate to foolish.

Let’s look at the phenomenon of widows who unintentionally wind up being amateur sleuths as well. Aunty Lee from Ovidia Yu’s Aunty Lee’s Delights and Eugenia Patterson from Tyora Moody’s Deep Fried Trouble are two excellent illustrations of this. Following the passing of their spouses, both ladies choose to pursue new careers. Despite what many would believe given their age, these women are nonetheless intelligent despite being old. They are not only able to start a new job, but they can also use their years of expertise to aid in their investigation.

These investigators have something that I particularly appreciate: despite how tragic it may be, one’s life doesn’t end when a lover or spouse goes away. These ladies choose to pursue a profession in the culinary arts after becoming widows. Usually, this is an early initiative that is unrelated to detective work. However, it is simply another instance of how they snub social norms and expectations for senior women. They demonstrate that, despite everything, their brain is still totally intact and capable of resolving all kinds of challenges.

Even though we like to think of ourselves as progressive, many people throughout the world still view women as an attachment to another person. They are someone’s daughter first, then spouse, then mother. Even if being a mother is something you always do, it’s not always a hands-on experience. Women are supposed to resume their roles as wives once the children have grown up and moved away. It is failing to acknowledge that they are and have always been their own unique individual.

The misconceptions people have about women that appear to double down as they get older will be covered in the section after this. They are less intelligent, for starters. Perhaps a more forgiving description would be that women are naturally weak, and this holds true for mental concerns as well. This is a presumption that is frequently made of younger women, and as women become older, it just gets worse. When women play the role of amateur detectives, the killer will frequently underestimate them.

No matter what area they work in, women have experienced being undervalued before. Due to the presumption that intellect declines with age, this only becomes worse as one gets older. Age won’t change this if you belong to a group that wasn’t given much of that regard in the beginning. It merely helps to reinforce the demeaning presumption about women that was already formed.

Older women can contribute to the investigation even if they’re not the primary detective. For example, consider Nana Jo from V.M. Burns Bookshop Mystery (The Plot Is Murder) or Nans from Leighann Dobbs’s Lexy Baker series. They consistently show themselves to be valuable supports for their intrepid grandchildren. They frequently share knowledge with their granddaughters that they did not have or were unable to acquire because of their experience.

The main characters adore their grandma, don’t get me wrong. They are nonetheless frequently taken aback by the creativity they exhibit. This demonstrates that false assumptions may affect them as well.

People tend to be less cautious about their words and actions when around older ladies because they believe that women are less clever. When in fact kids may be more highly perceptive than persons half their age, they are assumed to be off in their own little world and not paying attention. The fact that individuals are less cunning with their words and behavior allows elderly ladies sleuths to attentively examine them and figure out who the perpetrator is. One of the best-known examples of this is likely Jane Marple.

When I was younger, I shared the common belief that the senior members of my family were irrelevant. I never believed that anyone in my family, especially the ladies, lacked brains; I simply didn’t realize how clever they were until I got older and stopped trying to ignore them and started talking to them.

I believe we learn this lesson by our own experiences. Hopefully, it is a mistake you will only do once in your life, similar to burning your hand on the stove or deleting a saved game file when you are 98% done.

I value these kinds of works because they allow you to start shifting your perspective, which is why. You already know this by the time you reach that age. These books are a fantastic approach to get ready for it even if you didn’t.

In the end, old ladies who are also detectives keep slamming walls even beyond the conventional workplace. They demonstrate that being a detective is not exclusively for young people or men. The older women are also present and eager to get the honor and respect they are due.